I collected up most of my friends and went to the Whiskey 50 last weekend. Prescott, Arizona is located half-way between Phoenix and Flagstaff, tucked into the northern edge of the Bradshaw Mountains. A high desert outcrop of hills covered in Conifers and scrub oak trees. They stick out from the Sonoran Desert, a strange bump on the cactus riddled plains of Arizona. As you drive north from the disgusting sprawl of Phoenix, you’re released into a huge valley, with the chain of mountains running along the western edge. You wind between towering Cardón cacti, climbing from the desert floor to 5500 feet, 1600 metres.

Prescott was the territorial capital of Arizona in the 1870’s. The huge town hall in the middle of the square is a reminder to its grand origins. It’s now home to a mix of bars and restaurants in the compact downtown, a big old theatre, and huge desert-style houses spreading out in the foothills in every direction.

We’d rented a big house in the hills to fit our 12 friends into. We wound our way up the driveway in the dark on Thursday night, wondering where on earth we were going. To wake on Friday to the expansive views was exactly the introduction to the weekend I needed. The wind whistled gently against the gargantuan conifers, the warm sun filled me with energy to ride.

Friday was a packed day. In the morning we checked in with team sponsor Carborocket, who was one of the first companies to get set up at the expo. Brad from Carborocket looked after us really well; handing out recovery drink after the crit, and giving us ice cold water after the main event. I wanted to ride as much trail as possible on Friday – I wanted to remember the ins and outs of the course. My memory had shortened every aspect of the course. I had to go back and put the details in place. We rode for two hours in the morning, arriving at the Elks theatre in time for the riders meeting at lunch.

Friday afternoon was the “Fat Tyre Crit”. A spectacle for the locals, something for the amatuer racers to watch. A 50 mile race doesn’t lend itself well to spectating, so this is the organisers way of making Mountain Biking a little more accessible. We started in the town square, riding a two-minute loop up a steep hill, then careening back down to do it again. For 30 minutes. I metered my efforts from the gun, choosing to avoid the chaos of the lead group, and settle into a nice rhythm. It paid off, as I moved through the field, never getting out the saddle, never digging into those precious reserves. It’s great to race around with so many people cheering you on. It makes me feel like my extravagant past-time of bike racing is actually worth something.

Saturday morning. I’d prepared for some bad weather. I’m pretty certain that Bryan spends all of his free time browsing the NOAA weather website; he’d told me to expect rain, and I’d packed accordingly. I wasn’t expecting the weather we woke up to, though. As we surfaced inside our warm mountain house, the driving rain was pushed down the valley by a vicious wind. The town below was obscured by clouds, and rather than warming as the day progressed, the rain turned white. Through hail, sleet and finally an inch of snow, we waited inside, knowing the mass participation amateur race was supposed to be going on. To give you an idea of what it was like for them, read Kate Ginsbach’s report of her trials in the forest. 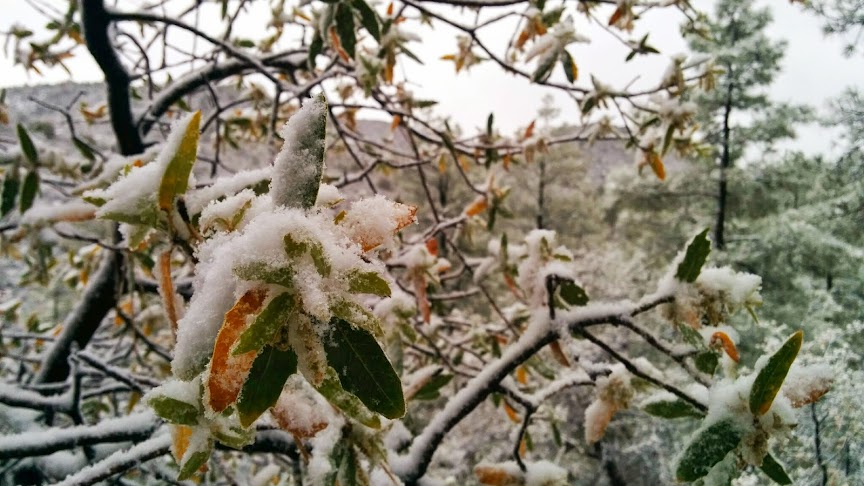 The irony of snow in the desert; by 2pm the sun was out. The temperature had climbed from -2*c to 15*c. The wind was still high, but it had wiped the snow right off the ground, leaving behind dry, tacky dirt. This is the kind of things mountain bikers get excited about – good dirt. Hero dirt. Grippy and smooth and sculpted by the rain. We headed out to ride for a little bit in the afternoon. Spin the aches and hydrogen ions out of the legs from the criterium the day before. We found a piece of singletrack at our front door, and proceeded to ride a couple of laps up and down until we were forced to pull ourselves away, to save the energy for the big deal tomorrow.

A house of professional cyclists eats a lot of food. It’s difficult to plan for three days of meals – it gets expensive to go to the supermarket everyday without having huge amounts of left overs. We tried our best to avoid waste, but it happened anyway. We were really lucky that Deidre’s Mum Lorraine came down to help us. She just quietly got along doing all the things no-one else wanted to. Such a stress reliever.

My race report from the Whiskey is here. Read it at your own peril. I’m yet to master the art of writing about races without including all the details. Everything went so smoothly on Sunday that I don’t even know what to write about. Perfect temperature to race in, no stress or hassle at any point, and coming home with a cheque for $500. We piled into the minivan after the race. Every position I tried to hold was uncomfortable. I drifted into a dazed sleep as we cruised back toward Phoenix. I’m so happy I wasn’t driving home. These interludes of racing squeezed into normal life are surreal. I was sitting in the office on Monday morning surrounded by colleagues who have no idea what my weekends entail. It’s kind of nice to have that alter ego.